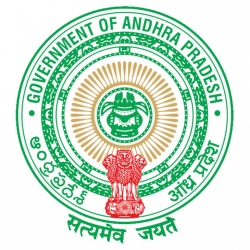 Andhra Pradesh is one of 28 primary states that make up the governmental divisions of modern-day India.

Located on India’s eastern coastline, the modern state of Andhra Pradesh was formed on November 1st, 1956 and is the fifth-largest state in India, encompassing an area of over 270,000 square kilometers. Famous for its bountiful natural resources, Andhra Pradesh is the country's largest producer of rice, and also grows cash crops such as cotton and tobacco.

The official language of Andhra Pradesh is Telugu, whose script can be seen on the lower left edge of this state symbol. The plant-like object in the center of the symbol is known as a 'kalash' or 'kalasha', a small pot used in Hindu rituals, often in combination with a coconut or other plant. It is the state's official emblem. The red design at the bottom of the symbol is a smaller version of the national emblem of India; a column capital with four lions that dates back to the rule of the Emperor Ashoka in the 3rd century BCE.