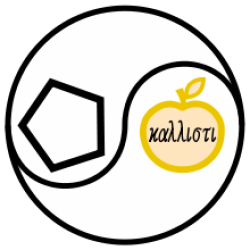 The Sacred Chao is a symbol used by Discordians to illustrate the interrelatedness of order and disorder.

It resembles a Yin-Yang symbol, but according to the Principia Discordia:

The Sacred Chao is not the Yin-Yang of the Taoists. It is the Hodge-Podge of the Erisians. And, instead of a Podge spot on the Hodge side, it has a pentagon which symbolizes the Aneristic Principle, and instead of a Hodge spot on the Podge side, it depicts the Golden Apple of Discordia to symbolize the Eristic Principle. The Sacred Chao symbolizes absolutely everything anyone need ever know about absolutely anything, and more! It even symbolizes everything not worth knowing, depicted by the empty space surrounding the Hodge-Podge. --- Malaclypse the Younger, Principia Discordia, Page 00049