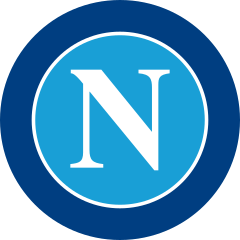 Società Sportiva Calcio Napoli, commonly referred to as Napoli, is an Italian professional football club based in Naples, Campania that plays in Serie A, the top flight of Italian football. The club have won two league titles, six Coppa Italia titles, two Supercoppa Italiana titles, and one UEFA Cup

As Naples is a coastal city, the colours of the club have always been derived from the blue waters of the Gulf of Naples. Originally, while using the name Naples FBC, the colours of the club implemented two shades of blue. However, since the 1920s, a singular blue tone has been used in the form of azure. Thus, Napoli share the nickname "Azzurri" with the Italy national team. The shade of blue has been sky blue in many instances.