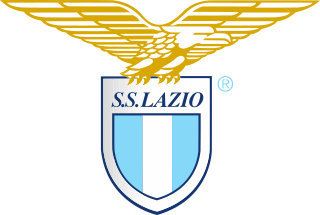 Società Sportiva Lazio, commonly referred to as Lazio, is an Italian professional sports club based in Rome, most known for its football activity. The society, founded in 1900, plays in the Serie A and have spent most of their history in the top tier of Italian football. Lazio have been Italian champions twice, and have won the Coppa Italia seven times, the Supercoppa Italiana three times, and both the UEFA Cup Winners' Cup and UEFA Super Cup on one occasion.

Lazio's colours of white and sky blue were inspired by the national emblem of Greece, due to the fact that Lazio is a mixed sports club this was chosen in recognition of the fact that the Ancient Olympic Games and along with it the sporting tradition in Europe is linked to Greece.

Originally, Lazio wore a shirt which was divided into white and sky blue quarters, with black shorts and socks. After a while of wearing a plain white shirt very early on, Lazio reverted to the colours which they wear today. Some seasons Lazio have used a sky blue and white shirt with stripes, but usually it is sky blue with a white trim, with the white shorts and socks. The club's colours have led to their Italian nickname of Biancocelesti.

Lazio's traditional club badge and symbol is the eagle, which was chosen by founding member Luigi Bigiarelli. It is an acknowledgment to the emblem of Zeus (the god of sky and thunder in Greek mythology) commonly referred to as Aquila; Lazio's use of the symbol has led to two of their nicknames; le Aquile ("the Eagles") and Aquilotti ("Eaglets"). The current club badge features a golden eagle above a white shield with a blue border; inside the shield is the club's name and a smaller tripartite shield with the colours of the club.