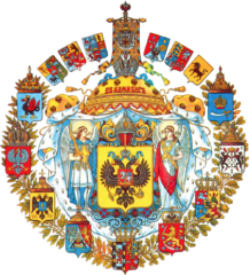 Russia, also officially known as the Russian Empire, was a state that existed from 1721 until it was overthrown by the short-lived liberal February Revolution in 1917.One of the largest empires in world history, stretching over three continents, the Russian Empire was surpassed in landmass only by the British and Mongol empires. The rise of the Russian Empire happened in association with the decline of neighboring rival powers: the Swedish Empire, the Polish–Lithuanian Commonwealth, Persia and the Ottoman Empire. It played a major role in 1812–14 in defeating Napoleon's ambitions to control Europe, and expanded to the west and south.

The House of Romanov ruled the Russian Empire from 1721 until 1762, and its German-descended cadet branch, the House of Holstein-Gottorp-Romanov, ruled from 1762.

At the beginning of the 19th century, the Russian Empire extended from the Arctic Ocean in the north to the Black Sea in the south, from the Baltic Sea on the west to the Pacific Ocean, and (until 1867) into Alaska in North America on the east. With 125.6 million subjects registered by the 1897 census, it had the third-largest population in the world at the time, after Qing China and India. Like all empires, it included a large disparity in terms of economics, ethnicity, and religion. There were numerous dissident elements, who launched numerous rebellions and assassination attempts; they were closely watched by the secret police, with thousands exiled to Siberia.

Economically, the empire had a predominately agricultural base, with low productivity on large estates worked by serfs (until they were freed in 1861). The economy slowly industrialized with the help of foreign investments in railways and factories. The land was ruled by a nobility (the boyars) from the 10th through the 17th centuries, and subsequently by an emperor. Tsar Ivan III (1462–1505) laid the groundwork for the empire that later emerged. He tripled the territory of his state, ended the dominance of the Golden Horde, renovated the Moscow Kremlin, and laid the foundations of the Russian state. Tsar Peter the Great (1682–1725) fought numerous wars and expanded an already huge empire into a major European power. He moved the capital from Moscow to the new model city of St. Petersburg, and led a cultural revolution that replaced some of the traditionalist and medieval social and political mores with a modern, scientific, Europe-oriented, and rationalist system.