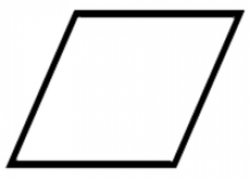 Every rhombus is a parallelogram, and a rhombus with right angles is a square.

The word "rhombus" comes from Greek ῥόμβος (rhombos), meaning something that spins, which derives from the verb ρέμβω (rhembō), meaning "to turn round and round". The word was used both by Euclid and Archimedes, who used the term "solid rhombus" for two right circular cones sharing a common base.