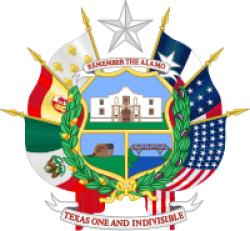 The Seal of the State of Texas was adopted through the 1845 Texas Constitution, and was based on the seal of the Republic of Texas, which dates from January 25, 1839.

The reverse of the seal has a more detailed design and is also defined by law as follows:

The design for the reverse side of the Great Seal of Texas shall consist of a shield, the lower half of which is divided into two parts; on the shield's lower left is a depiction of the cannon of the Battle of Gonzales; on the shield's lower right is a depiction of Vince's Bridge; on the upper half of the shield is a depiction of the Alamo; the shield is circled by live oak and olive branches, and the unfurled flags of the Kingdom of France, the Kingdom of Spain, the United Mexican States, the Republic of Texas, the Confederate States of America, and the United States of America; above the shield is emblazoned the motto, "REMEMBER THE ALAMO", and beneath the shield are the words, "TEXAS ONE AND INDIVISIBLE"; over the entire shield, centered between the flags, is a white five-pointed star.

In rendering, the Confederate States of America flag is an altered version of the first national flag.