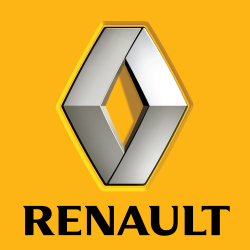 The first badge of Renault was introduced in 1900 and consisted in Renault brothers' intertwined initials. When the company started mass production in 1906, it adopted a gear-shaped logo with a car inside it. After the World War I the company used a special logo depicting a FT-17 tank. In 1923 it introduced a new circle-shaped badge, which was replaced by the today most widely known "diamond" in 1925.

The Renault diamond logo has been through many iterations since it was first used. To modernize its image, Renault asked Victor Vasarely to design its new logo in 1972. Vasarely had already worked in the advertising world and he placed his graphic talents at the service of the brand. The transformed logo maintained the diamond shape but gained cleaner, more dynamic and angular lines. A seventies design that has since been revised to reflect the new more rounded lines of the brand’s styling cues. The current diamond badge has been in use since 1992, though the Renault brand logo for web and print use was updated two times since then. In 2004 was incorporated a more realistic badge representation inside a yellow square with the word "Renault" in Renault Identité typeface besides it. In 2007, Renault commissioned to Saguez & Partners a new redesign. In this new version, currently in use, the word "Renault" was included inside the yellow square.

The yellow associated with the company appeared initially in the diamond badge of 1946, when Renault was nationalised.

Both the Renault logo and its documentation (technical as well as commercial) historically used a specially designed typeface called Renault MN, developed by British firm Wolff Olins. This type family is said to have been designed not for prestige reasons, but mainly to save costs at a time where the use of typefaces was more costly than it is now. In 2004, French typeface designer Jean-François Porchez was commissioned to design a replacement. This was shown in October of that year and is called Renault Identité.

Since 2007, as part of the Saguez & Partners revamp of Renault's visual image, all the graphic advertising make use of the Helvetica Neue Condensed typeface.