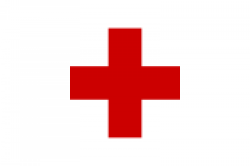 The Red Cross on white background was the original protection symbol declared at the 1864 Geneva Convention.

The ideas to introduce a uniform and neutral protection symbol as well as its specific design originally came from Dr. Louis Appia and General Henri Dufour, founding members of the International Committee. The Red Cross is defined as a protection symbol in Article 7 of the 1864 Geneva Convention, Chapter VII ("The distinctive emblem") and Article 38 of the 1949 Geneva Convention ("For the Amelioration of the Condition of the Wounded and Sick in Armed Forces in the Field"). There is an unofficial agreement within the Red Cross and Red Crescent Movement that the shape of the cross should be a cross composed of five squares.[citation needed] However, regardless of the shape, any Red Cross on white background should be valid and must be recognized as a protection symbol in conflict. Of the 186 national societies which are currently recognized by the ICRC, 152 are using the Red Cross as their official organization emblem. In addition, the Red Cross is currently used by the national society of Tuvalu which has applied for official recognition.