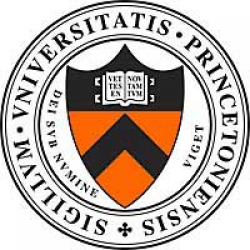 Two of the University’s most prominent graphic images are the seal and the shield.

The seal, considered the corporate signature of the trustees, is embossed on diplomas and printed on other official documents authorized by them.

The seal of the College of New Jersey—the name by which Princeton University was first known—was used for almost a century and a half. In the upper part of a circle, it contained an open Bible with Latin characters VET NOV TESTAMENTUM signifying the Old and New Testaments. Over the Bible, was the motto VITAM MORTUIS REDDO (I restore life to the dead). Underneath, on the right, was a table with books signifying scholarship. On the left, was a diploma, signifying the goal of the student. On the outside of the circle, the Latin text read SIGILLUM COLLEGII NEO-CAESARIENSIS IN AMERICA (seal of the College of New Jersey in America).

Since 1896, when at the sesquicentennial of its founding the College of New Jersey became Princeton University, the corporate seal has been simpler. It is described in the trustees’ minutes of Feb. 13, 1896, as: … a shield resting upon a circle. In the upper part of the shield an open Bible with Latin characters VET NOV TESTAMENTUM signifying the Old and New Testaments. … In the lower part a chevron, denoting the rafters of a building. In the spaces between the sides of the shield and the circle the motto DEI SUB NUMINE VIGET (Under God’s power she flourishes). On the outside of the circle SIGILLUM UNIVERSITATIS PRINCETONIENSIS (seal of Princeton University).

The full seal is strictly reserved for the purpose described in the college’s original charter, namely as “a Common Seal under which they [the trustees] may pass all Diplomas, or Certificates of Degrees, and all Other the Affairs & Business of and Concerning the said Corporation. …”