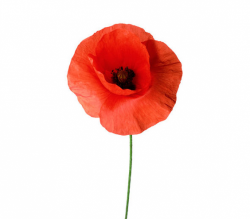 The cultural importance of the poppy stretches back over 3000 years, and its symbolic associations are fairly well known to modern society. These associations can be divided into two broad categories, and there are several layers within each category that add to the flower’s significance.

The poppy is a well-known symbol of sleep and death, and these aspects form the basis of its first major symbolic category. In ancient Greece, poppies were strongly associated with Morpheus, the god of sleep and dreams. They also had a connection to Demeter, the goddess of agriculture. After her daughter Persephone was kidnapped and taken to the Underworld, Demeter was stricken with grief and refused to allow any crops to grow on the Earth (for the full details of this story, see the symbol for ‘Pomegranate’). To soothe her grief, Demeter used the poppy to help her rest, and this period of barrenness became the season of winter.

The reasoning behind the poppy's association with sleep is surprisingly straightforward. One particular species of the flower, Papaver sommiferum, is also known as the opium poppy, and has been a source of narcotic substances for thousands of years. Since the primary effect of many narcotics is a feeling of peace and tranquility, it’s no surprise that the flower which produces such drugs became associated with sleep and death. This particular meaning of the poppy has also been on full view in popular literature for more than a century: L. Frank Baum’s “The Wonderful Wizard of Oz” features a poppy field that puts any flesh-based creature who wanders through it into a deep sleep; in George R.R. Martin’s series “A Song of Ice and Fire” (adapted into the television series “Game of Thrones”), milk of the poppy is a substance used for sedation and anesthetic purposes; and in J.K. Rowling’s “Harry Potter” novels, the first name of Madam Pomfrey, the resident nurse of Hogwarts School of Witchcraft and Wizardry, is Poppy, an homage to the long tradition of using the flower’s narcotic products medicinally.

The other category of poppy symbolism has to do the flower's well-known use as a memorial emblem. Interestingly, the major impetus for this symbolic association did not occur until fairly recently. After the First World War, poppies came into bloom on the battlefield of Flanders, an area of modern-day Belgium. Since then, poppies have become a symbol of remembrance for soldiers who died in both World Wars. The Canadian poet John McCrae, in his work “In Flanders Fields”, cemented this aspect of the poppy’s symbolism and launched the phenomenon of artificial “remembrance poppies” to be used as memorial tokens.