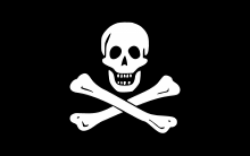 The Jolly Roger as a black flag with skull and bones has recently gained a popularity among anarchists.

Some claim to use the Jolly Roger as a form of appreciation for the Pirate way of life in freedom and a lack of authority. Many Pirate ships were loosely democratic and most crew mates were working class fugitives from the highly repressive societies in which they were born. Anarchists may find affinity with the concept of pirate utopias, especially the island of legend, Libertatia. The Libertatian pirates have been identified as precursors to anarchists. Several articles relating to the connection between anarchism and piracy can be found in the libcom.org library. Some anarchist hacktivists and infoanarchists consider themselves pirates due to their free lifestyles in the world of technology and their defiance of intellectual property laws by way of copyright infringement, patent infringement and software piracy, all of which are called piracy.