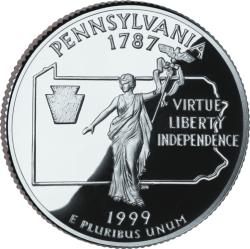 Pennsylvania became a state on December 12th, 1787, and was the second of the 50 State Quarters to be issued. Three distinct images are present on the coin: the female figure is a depiction of “Commonwealth”, a statue created by Roland Hinton Perry that stands in Pennsylvania’s capital; the roughly rectangular shape is an outline of the state’s border; and the small shape in the upper left corner is a keystone, in homage to Pennsylvania’s nickname, “the keystone state” (it was a prominent player in the country’s early political and economic development).