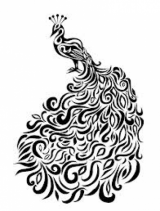 Although indigenous to the Indian sub-continent, the peacock has spread far beyond its native land and acquired symbolic meaning in a number of diverse cultures.

In India, the peacock carries both negative and positive symbolism. According to Hindu tradition, the flesh of the peacock is considered impure (i.e. bad to eat), since during the time of creation it was the one who captured the negative energies of the universe in its body. On the other hand, the peacock is also the chosen mount of Kartikeya (also known as Skanda or Murugan), the god of war and son of the deities Shiva and Parvati. In secular terms, Indians see the peacock as a symbol of love and beauty- associations present in other cultures as well. However, the birds also posses a rather unmelodious cry, considered by some to be a herald of the rainy season/monsoon. There is even am Indian saying that accurately summarizes all of this varied symbolism: "a peacock has the feathers of an angel, the voice of the devil, and the walk of a thief".

In the Islamic world, the peacock is strongly associated with Paradise. In his epic poem The Conference of the Birds, the 12th century Persian poet Farid ud-Din Attar says the peacock was one of the creatures who originally lived in Paradise, but like Adam and Eve, was tempted into sin by the serpent and thus exiled from the Garden of Eden. Attar also says, however, that if the peacock can defeat the serpent and its temptation, Paradise will once again be open to it, adding a theme of redemption to the peacock's symbolism. Among Javanese Muslims, there is a belief that peacocks are the guardians of the Gates of Paradise. The bird's magnificent fan-shaped tail was associated with cosmic entities such as the sun and the heavens, and, consequentially, the power of royalty. The famous ‘Peacock Throne’ of Persia (an immense jewel-encrusted treasure) was originally commissioned by the Indian emperor Shah Jahan in the 17th century and subsequently stolen by the Persians about a century later (it has since been lost).

Arriving in Europe via international trade routes such as the famed Silk Road, the peacock was well known to both the Ancient Greeks and Romans. The Greeks associated the bird with Hera, queen of the gods, but the many circular markings on its tail feathers were seen as a form of the evil eye and thus considered inauspicious. The Romans frequently depicted peacocks in mosaics and various other artworks. Possibly via the old Greek connection to Hera, peacocks also became closely associated with the Roman Empresses. The European fascination with peacocks continued into the Middle Ages, where they were widely admired as symbols of beauty and immortality- it was believed that their flesh could not decay. However, it was during this time that the birds acquired much of the negative symbolic meaning still connected with them today. The well-known association of the peacock with pride and boasting doubtless came from its flashy display of tail feathers while courting a mate, and unlike the Indians, the Europeans often featured roasted peacock, still dressed in its skin and tail feathers, as a prominent course of Medieval banquets.