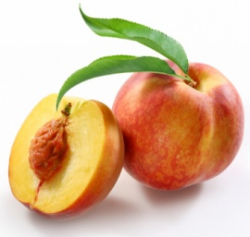 Peaches hold an exalted status in Chinese culture, where they are strongly associated with the heavens and with eternal life.

Much like the golden apples of the Hesperides in Greek mythology, peaches in China are considered the fruits of immortality. According to tradition, these famous immortal peaches belong to the Queen of Heaven and grow in a garden far to the west, only blooming once every several thousand years (the exact time varies with different versions of the story). In Daoism, there is a group of figures known as the Eight Immortals, who are also associated with peaches

On a more mundane level, peaches are symbolic of spring and the New Year, thus carrying connotations of fertility. The time when peaches are blossoming on the trees is considered an auspicious time to get married. At the most basic level, peaches are common symbol of luck and good fortune in China. The design of the famous ideogram known as “Shou” or “Chou” is based on a peach pit and appears on many objects associated with Chinese culture (for full details, see the symbol for ‘Shou’).