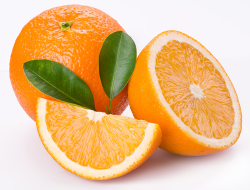 This brightly colored citrus fruit was first cultivated in eastern Asia, and has since spread to many other parts of the world. While the fruit itself and its peel are used in a variety of culinary traditions, oranges are also imbued with several different symbolic meanings.

One of these symbolic meanings is fairly obvious and doesn’t require too much imagination. Due to their color and round shape, oranges are representative of the sun. They also carry connotations of good luck, and in China and Japan oranges are typically eaten during celebrations of the New Year.

The orange is also a symbol of fertility. In parts of Asia and the Middle East, it is (or previously was) commonly associated with weddings: On an orange tree, both the flower and the fruit can appear at the same time, symbolizing both virginity and fertility and making orange blossoms the choice adornment for brides.

The Crusaders introduced oranges to Europe beginning in the 11th and 12th centuries, but since there were only certain areas of the continent where the local climate permitted their growth, oranges acquired special symbolism in territories where this was not possible. In parts of northern Europe, the expense and difficulty involved in obtaining fresh oranges, plus the fact that the fruit usually ripens in December, made them a popular choice for gifts and decorations at Christmastime, as a symbol of celebration and good fortune.