National Emblem of the People's Republic of China 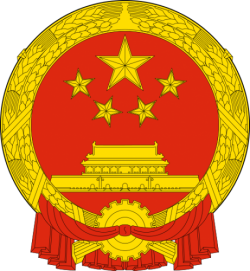 Above this representation are the five stars found on the national flag. The largest star represents the Communist Party of China, while the four smaller stars represent the four social classes as defined in Maoism.

The outer border of the red circle shows sheaves of wheat and the inner sheaves of rice, which together represent agricultural workers. At the center of the bottom portion of the border is a cog-wheel that represents industrial workers.