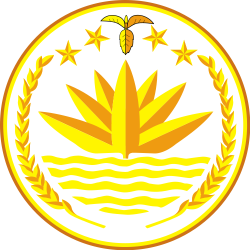 The national emblem of Bangladesh was adopted shortly after independence in 1971.

Located on the emblem is a water lily, that is bordered on two sides by rice sheaves. Above the water lilly are four stars and a three connected jute leaves. The water lily is the country's national flower, and is representative of the many rivers that run through Bangladesh. Rice represents its presence as the staple food of Bangladesh, and for the agriculture of that nation. The four stars represent the four founding principles that were originally enshrined in the first constitution of Bangladesh in 1972: nationalism, secularism, socialism, and democracy.

The details of the emblem is given as quoted below:

The national emblem of the Republic is the national flower Shapla (Nymphaea pubescens) resting on water, having on each side and ear of paddy and being surmounted by three connected leaves of jute with two stars on each side of the leaves. - Constitution of Bangladesh Article 4(3).