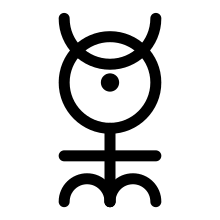 The Monas Hieroglyphica (or Hieroglyphic Monad) is an esoteric symbol invented and designed by John Dee, the Elizabethan Magus and Court Astrologer of Elizabeth I of England. It is also the title of the 1564 book in which Dee expounds the meaning of his symbol.

The Hieroglyphic embodies Dee's vision of the unity of the Cosmos and is a composite of various esoteric and astrological symbols. Dee wrote a commentary on it which serves as a primer of its mysteries. However, the obscurity of the commentary is such that it is believed that Dee used it as a sort of textbook for a more detailed explanation of the Hieroglyph which he would give in person. In the absence of any remaining detail of this explanation the full significance of the glyph may never be known.