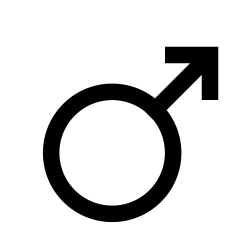 Mars is the fourth planet from the Sun and the second smallest planet in the Solar System. Named after the Roman god of war, it is often described as the "Red Planet", as the iron oxide prevalent on its surface gives it a reddish appearance.

Mars is named after the Roman god of war. In different cultures, Mars represents masculinity and youth. Its symbol, a circle with an arrow pointing out to the upper right, represents a shield and spear. It is also used as a symbol for the male gender.

The symbol for Mars was also used for iron in alchemy.