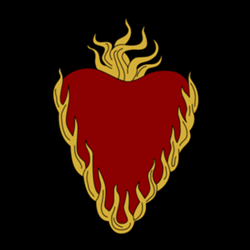 The faith of R’hllor, also known as the Lord of Light, is one of several religions followed in the world of Game of Thrones.

Based on author George R.R. Martin’s famous series of novels (collectively known as “A Song of Ice and Fire”), the television series “Game of Thrones” first premiered in 2010 on the channel HBO. It is set in a fantasy world heavily based on the society and culture of the European Middle Ages. Two primary continents, known as Westeros and Essos, make up the bulk of the visible landmass in this world, with the former being featured in storylines much more frequently. While typical elements from fantasy stories, such as dragons and various forms of magic, are seen throughout the series, in the long run these generally take a backseat to the military conflicts, political machinations and family dynamics that are the principle focus of the story.

There are several religious movements in this world that each play a prominent role throughout the series. As well as distinguishing various types of characters, these religions often have a significant impact on the decisions that those characters make in the overall storylines. One of these religions is the faith of the Lord of Light, a strongly dualistic belief system that is highly popular on the continent of Essos, but thus far has gained little following in the kingdoms of Westeros (apart from a few isolated pockets). Aside from fire worship, visions and prophecy, the primary tenant of the faith is that R’hllor, the Lord of Light, is the one true god and is locked in a constant struggle with a deity known as the “Great Other”, who represents the cold and darkness of death. The primary symbol of the faith is a red heart surrounded and crowned by yellow flames. Stannis Bartheon, one of the key characters in the series from the second season onwards, is a devout follower of the Lord of Light and has adopted this “fiery heart” as his personal sigil (for full details, see the symbol for ‘House Baratheon of Dragonstone’).

On a side note, creator George R.R. Martin has commented that the faith of the Lord of Light was strongly influenced by Zoroastrianism, a religion that developed in ancient Persia (modern-day Iran) sometime in the first millennium BCE. The two faiths share many common features, such as fire worship and a strong belief in the dualistic nature of the cosmos. R’hllor can be seen as a parallel to Ahura Mazda, the chief Zoroastrian deity, while the “Great Other” is clearly based on his eternal nemesis, Ahriman.