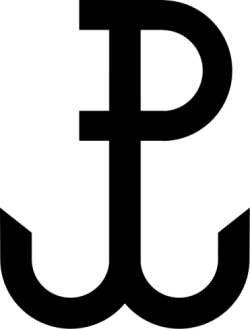 The Kotwica was a World War II emblem of the Polish Secret State and Armia Krajowa (Home Army, or AK).

It was created in 1942 by members of the AK Wawer "Small Sabotage" unit, as an easily usable emblem for the Polish struggle to regain independence. The initial meaning of the initials PW was Pomścimy Wawer ("We shall avenge Wawer"). The Wawer massacre (26–27 December 1939) was considered to be one of the first large scale massacres of Polish civilians by German troops in occupied Poland. At first, Polish scouts from sabotage groups painted the whole phrase upon walls. However, this was soon shortened to the letters PW (signifying also the phrase Polska walcząca, "Fighting Poland"), after a quick internal contest organized by the AK with the winning design (pictured) by Anna Smoleńska from Gray Ranks. She died at Auschwitz in 1943, at the age of twenty-three.

The P and W initials evolved into the Kotwica (Anchor) - a combination of the letters which was easy and fast to paint. The Kotwica began to signify more than just its intended abbreviation, taking on more meanings such as Polska Walcząca ("Fighting Poland"), Wojsko Polskie ("Polish Army") and Powstanie Warszawskie ("Warsaw Uprising"). Eventually, the Kotwica became a patriotic symbol of defiance against occupiers and was painted in a graffiti style on building walls.