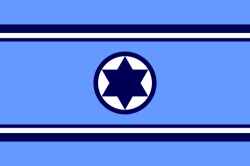 The Israeli Air Force (IAF; Hebrew: זרוע האוויר והחלל, Zroa HaAvir VeHahalal, "Air and Space Arm", commonly known as חיל האוויר, Kheil HaAvir, "Air Corps") is the air force of the State of Israel and the aerial arm of the Israel Defense Forces. It was founded on May 28, 1948, shortly after the Israeli Declaration of Independence. As of May 2012 its Commander in Chief was Aluf Amir Eshel.

The insignia/roundel of the Israeli Air Force is a blue Star of David on a white circle. This is usually painted in six positions – on the top and bottom of each wing, and each side of the fuselage. Squadron markings are usually carried on the tail fin.