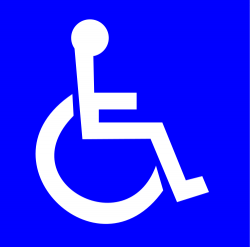 The International Symbol of Access (ISA), also known as the (International) Wheelchair Symbol, consists of a blue square overlaid in white with a stylized image of a person using a wheelchair. It is maintained as an international standard, ISO 7001, and a copyrighted image of the International Commission on Technology and Accessibility (ICTA), a committee of Rehabilitation International. It was designed by Susanne Koefoed in 1968. The design was modified by Karl Montan. Taking the original copy of the design, he added a circle to the top of the seated figure, thus giving it a head.

The symbol is often seen where access has been improved, particularly for wheelchair users, but also for other disability issues. Frequently, the symbol denotes the removal of environmental barriers, such as steps, to help also older people, parents with baby carriages, and travellers. Universal design aims to obviate the need for such symbols by creating products and facilities that are accessible to nearly all users from the start. The wheelchair symbol is "International" and therefore not accompanied by Braille in any particular language.

The ISA is assigned the Unicode codepoint U+267F, showing as ♿