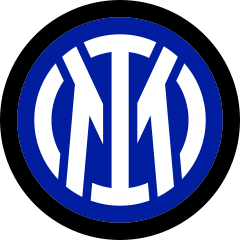 Football Club Internazionale Milano, commonly referred to as Internazionale or simply Inter, and known as Inter Milan outside Italy, is an Italian professional football club based in Milan, Lombardy. Inter is the only Italian side to have always competed in the top flight of Italian football since its debut in 1909.

One of the founders of Inter, a painter named Giorgio Muggiani, was responsible for the design of the first Inter logo in 1908. The first design incorporated the letters "FCIM" in the centre of a series of circles that formed the badge of the club. The basic elements of the design have remained constant even as finer details have been modified over the years. Starting at the 1999–2000 season, the original club crest was reduced in size, to give place for the addition of the club's name and foundation year at the upper and lower part of the logo respectively.