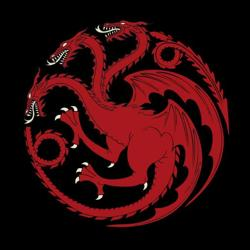 The sigil of House Targaryen from Game of Thrones.

The continent of Westeros is made up of many different regions, each of which has its own culture and history. Most of these regions form constituent parts of a single political realm, which is presided over by a ruling monarch. While the monarch holds ultimate power over the realm, local governance of each region is handled by a “Great House”, a noble family whose members answer directly to the sovereign. House Targaryen, however, was never part of this system of governance; rather, they were the originators of it. The Targaryens are not native to Westeros but are descended from the nobility of Valyria, a vast and powerful empire that once encompassed large portions of the continent of Essos. Five thousand years before the timeline of the series, the Valyrians discovered dragons living in the volcanoes of their homelands and eventually managed to train them. Over the following centuries, the Valyrians established an empire using the power of the dragons, and this "Valyrian Freehold" (as it was known) became greatest civilization the world had ever seen, enduring for several millennia. Approximately four hundred years prior to the events portrayed in “Game of Thrones”, the Freehold was destroyed in a cataclysmic event known only as 'The Doom', and the Targaryens were the only noble family to survive the destruction. Having settled on the island fortress of Dragonstone, it was a century later that the Targaryens made their boldest move; Aegon Targaryen, along with his sisters Visenya and Rhaenys, decided to use the last three surviving dragons to launch an all-out conquest of Westeros.

Before the Targaryens, each region of Westeros (except for The Riverlands, which was then ruled by the Iron Islands) was a sovereign kingdom in its own right, but the death toll left in the wake of the invasion completely altered the balance of power on the continent. Aegon established himself as the sole ruler of Westeros and founded a dynasty that would endure for nearly three centuries. The sigil of House Targaryen is a three-headed red dragon on a field of black, and their motto is “Fire and Blood”. The three heads of the dragon symbolize Aegon and his sisters and are an homage to the three dragons that led the charge in their conquest.