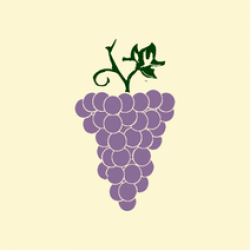 The sigil of House Redwyne from Game of Thrones.

The continent of Westeros is made up of many different regions, each of which has its own culture and history. Most of these regions form constituent parts of a single political realm, which is presided over by a ruling monarch. While the monarch holds ultimate power over the realm, local governance of each region is handled by a “Great House”, a noble family whose members answer directly to the sovereign. Each region also possesses any number of “Vassal Houses” who owe their loyalty to the governing Great House in one capacity or another. House Redwyne is one of the Vassal Houses in The Reach. Their ancestral home is known as the Arbor, a large island off the southwestern coast famous for its warm climate. The sigil of House Redwyne is a burgundy grape cluster on a field of white. Their motto, if they have one, has thus far not been revealed.

The symbolic meaning behind House Redwyne’s sigil is explained in the history that George R.R. Martin developed for his world. The Arbor is the largest wine producer in Westeros, and its high-quality vintages are famous throughout the Seven Kingdoms and beyond. As a major player in the wine trade, the Redwynes command one of the largest mercantile fleets on the continent. Additionally, the greater part of The Reach’s navy is based on the Arbor, giving the island immense commercial and strategic value.