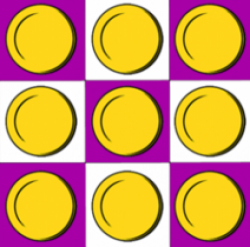 The sigil of House Payne from Game of Thrones

The continent of Westeros is made up of many different regions, each of which has its own culture and history. Most of these regions form constituent parts of a single political realm, which is presided over by a ruling monarch. While the monarch holds ultimate power over the realm, local governance of each region is handled by a “Great House”, a noble family whose members answer directly to the sovereign. Each region also possesses any number of “Vassal Houses” who owe their loyalty to the governing Great House in one capacity or another. House Payne is one of the Vassal Houses in The Westerlands, the region ruled by House Lannister. Their sigil of consists of nine golden coins on a checkered field of white and purple. Their motto, if they have one, has thus far not been reveled.

In the history that George R.R. Martin developed for his world, House Payne is noted as traditionally providing loyal servants to their overlords, House Lannister. This is much the same in the television series, and although House Payne itself plays a rather minor role in the series, the two featured members of this house occupy unusually significant positions in terms of storylines. Podrick Payne is a young man who serves as squire to Tyrion of House Lannister. Though his position is not an illustrious one by most means, Podrick’s actions and observations, whether he consciously notices or not, often reveal key points in the storylines and can bring forth unexpected (yet significant) emotional responses from other characters. Ilyn Payne, from another branch of the family, serves as the King’s Justice, i.e. his official executioner. Although his role is much smaller than that of his kinsman Podrick, at least in terms of number of appearances, his impact is even more significant to the overall storyline; Ilyn Payne’s execution (on the king’s orders) of Eddard Stark at the end of season one essentially sets in motion the entire plotline of seasons two and three, and its effects reverberate beyond that into successive seasons as well.