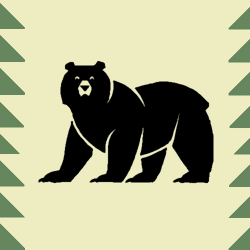 The sigil of House Mormont from Game of Thrones.

The continent of Westeros is made up of many different regions, each of which has its own culture and history. Most of these regions form constituent parts of a single political realm, which is presided over by a ruling monarch. While the monarch holds ultimate power over the realm, local governance of each region is handled by a “Great House”, a noble family whose members answer directly to the sovereign. Each region also possesses any number of “Vassal Houses” who owe their loyalty to the governing Great House in one capacity or another. House Mormont is one of the Vassal Houses in The North. Their ancestral land is known as Bear Island, located off the far north-western coast. The sigil of House Mormont is a black bear in a green wood, and their motto is “Here We Stand”.

The symbolic meaning behind House Mormont’s sigil is fairly straightforward: Bear Island is a heavily wooded area that gets its name from a local population of the animals, hence a bear appears on the Mormont’s sigil. There may, however, be a more subtle meaning to the imagery: mother bears are famous for being ferociously protective of their young, and on Bear Island there is a tradition of warrior women acting as protectors of their homes and their children. While this interpretation is never specifically mentioned in an official capacity, it could give additional significance to the imagery of the sigil of House Mormont.