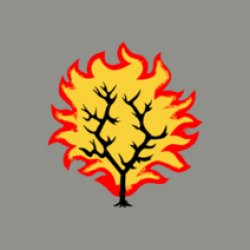 The sigil of House Marbrand from Game of Thrones.

The continent of Westeros is made up of many different regions, each of which has its own culture and history. Most of these regions form constituent parts of a single political realm, which is presided over by a ruling monarch. While the monarch holds ultimate power over the realm, local governance of each region is handled by a “Great House”, a noble family whose members answer directly to the sovereign. Each region also possesses any number of “Vassal Houses” who owe their loyalty to the governing Great House in one capacity or another. House Marbrand is one of the Vassal Houses in The Westerlands, and their ancestral keep is known as Ashemark, located near the mouth of the Tumblestone River. The sigil of House Marbrand is flaming tree on a field of grey, and their motto is “Burning Bright”.

In the series, House Marbrand plays virtually no role at all, but they do carry significant weight in the history that George R.R. Martin developed for his world. The Marbrands have especially close ties to their overlords, House Lannister. The two Houses intermarried in a previous generation, so all the Lannisters and their descendants who appear in the series share some degree of blood with House Marbrand.