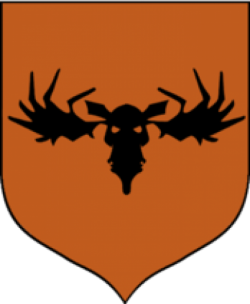 The sigil of House Hornwood from Game of Thrones.

The continent of Westeros is made up of many different regions, each of which has its own culture and history. Most of these regions form constituent parts of a single political realm, which is presided over by a ruling monarch. While they hold ultimate power over the realm, local governance of each region is handled by a “Great House”, a noble family whose members answer directly to the monarch. Each region also contains an extensive network of lesser noble houses called “Vassal Houses”, who owe their loyalty to the governing Great House. House Hornwood is one of the Vassal Houses in the North. Their ancestral keep- also known as Hornwood- is located to the southeast of Winterfell, the ancestral stronghold of their overlords, House Stark. The sigil of House Hornwood is a brown moose head on a field of orange, and their motto is “Righteous in Wrath”.