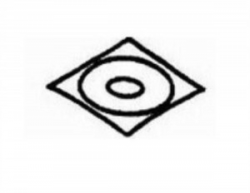 The meaning of the Great Spirit symbol was to signify the divine power that created the world.