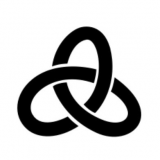 The Gordian Knot is a legend of Phrygian Gordium associated with Alexander the Great. It is often used as a metaphor for an intractable problem (untying an impossibly-tangled knot) solved easily by finding an approach to the problem that renders the perceived constraints of the problem moot ("cutting the Gordian knot").

The knot may have been a religious knot-cipher guarded by Gordian/Midas' priests and priestesses. Robert Graves suggested that it may have symbolised the ineffable name of Dionysus that, knotted like a cipher, would have been passed on through generations of priests and revealed only to the kings of Phrygia.