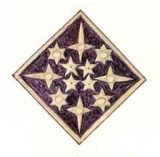 Heraldic device of Gil-Galad, a character from J.R.R. Tolkien’s Middle-Earth.

Known primarily as the author of The Hobbit, The Lord of the Rings, and The Silmarillion, John Ronald Reuel Tolkien also created a number of original illustrations for his works. Among these illustrations were heraldic devices for several of his characters. This device belongs to Gil-Galad, an Elf of the Noldor clan and the last High King of that people.

Born during the First Age of Middle-Earth, Gil-Galad was too young to participate in the great wars that defined that era. During the Second Age, he founded his own kingdom and was chosen as the bearer of one of the three great Elven Rings of Power. During the Last Alliance of Elves and Men – a battle intended to defeat the dark lord Sauron once and for all – Gil-Galad fought valiantly, but was eventually slain by Sauron himself.

According to the website Tolkien Gateway, these images appeared on calendars and book jackets in the 1970's, shortly after the author's death. Although the full symbolism behind many of them is unknown, certain details can be speculated upon: The stars on Gil-Galad’s device are likely a reference to his name, which translates as “Star of Radiance”.