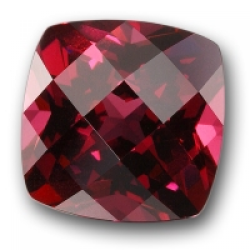 Like many gemstones, the garnet possesses a number of different symbolic meanings.

When most people think of garnets, the color that comes to mind is a deep blood-red. While this is certainly true, there is a larger picture to consider. “Garnet” is actually an umbrella term that refers to a group of distinctive but related gemstones. All members of this group share a similar physical and chemical makeup, but can vary quite widely in their coloring: Pyrope and almandine both display the rich red color associated with garnets and are most famously identified as such. Other members of the group possess rather different coloring; spessartine displays an orange tint, almandine (mentioned above) can also be tinged with purple or violet, and demantoids, the most valuable member of the family, are colored green.

Despite these color variations, the deep red members of the garnet family carry the most symbolic weight, and will be the primary focus of this article. Like many gemstones, the garnet’s color is a primary indicator of its symbolic importance. Similar to rubies (which they can be confused with), garnets were once thought to have a strong medicinal connection to blood. As such, they were used to treat hemorrhages, liver diseases, and to help staunch bleeding wounds. This connection with blood gave garnets an association with the planet Mars, something also shared by rubies. Besides blood-related conditions, garnets were employed to treat a series of other aliments, including melancholy and insomnia.

The word “garnet” is connected in Latin to the word for “pomegranate”, and once you’ve seen the inside of one of these fruits, the connection becomes clear; dozens of shiny, bright red seeds resemble a veritable nest of the gemstones themselves. This connection with the pomegranate has also lent the garnet an association with fertility (for more detail, see the symbol for ‘Pomegranate’).

Garnets have held a special place in Jewish tradition for many centuries. The High Priest of ancient Israel wore a breastplate studded with twelve different gemstones (a precursor to the modern concept of birthstones), one of which was a garnet. There is also a legend that Noah set a large carved garnet in the middle of the Ark, and its glow provided the entire vessel with illumination. This legend possibly stems from a certain characteristic seen in the stones. When cut into a cabochon (essentially a dome shape), garnets are particularly adept at refracting light, and this occurs in such a way that the gems seem to be glowing from within. Due to this quality, garnets are sometimes referred to as “carbuncles” (Latin for ‘little coals’).

Garnets are also the traditional birthstone for the month of January.