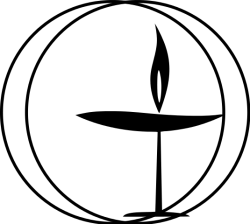 The symbol had its origins in a logo designed by Austrian refugee Hans Deutsch for the Unitarian Service Committee (USC) (now the Unitarian Universalist Service Committee) during World War II. According to USC director Charles Joy, Deutsch took his inspiration from the chalices of oil burned on ancient Greek and Roman altars. It became an underground symbol in occupied Europe during World War II for assistance to help Unitarians, Jews, and other people escape Nazi persecution.

Later, associations were made between this symbol and the Hussites religious sect. Czech reformer Jan Hus (1369–1415) began reading the Bible to his congregations in their native language, while the Catholic Church demanded that the Bible only be read in Latin. Also, during communion, the chalice was reserved for the clergy; the laity only received bread. When a church council condemned the practice of priests who were giving the chalice to their congregants, Hus refused to support the condemnation. After his execution by burning in 1415, followers of Hus adopted the "lay chalice" as an important symbol of their movement.