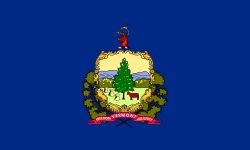 The flag of the state of Vermont consists of the state's coat of arms and motto. The Vermont General Assembly adopted the current flag on June 1, 1923.

Multiple versions of the flag have been included throughout history. Originally, the flag was the same as the flag of the Green Mountain Boys. It was then changed to look similar to the flag of the United States, consisting of red and white stripes, and a blue canton. It was changed to be dissimilar to avoid confusion. Proposals have been brought up to revert the flag back to the Green Mountain Boys' flag, but none have succeeded.