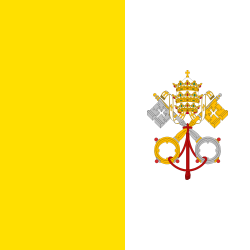 The flag of Vatican City was adopted on June 7, 1929, the year Pope Pius XI signed the Lateran Treaty with Italy, creating a new independent state governed by the Holy See. The Vatican flag is modeled on the flag of the earlier Papal States.

The flag consists of two vertical bands, one of gold or yellow (hoist side) and one of white with the crossed keys of Saint Peter and the Papal Tiara centered in the white band. The crossed keys consist of a golden and a silver key, in which the silver key is placed in the dexter position. The flag is one of only two square country flags in the world, the other being the flag of Switzerland. The yellow and white stripes break the heraldic rule of tincture. According to tradition, this is because the Vatican follows God's rules and not man's.

the papal tiara (as used under the pontificate of Pius XI);

the two keys which represent the keys to Heaven (according to the Gospel of Matthew 16:19) given by Jesus Christ to St. Peter. The popes are regarded as the successor of Peter, and the gold and silver keys have been significant elements in the symbolism of the Holy See since the 13th century. The gold represents spiritual power, while the silver key represents worldly power. The order of the keys on the coat of arms of Vatican City is the reverse of the coat of arms of the Holy See, in order to distinguish between the two entities.

a red cord connecting the keys.

The yellow and white of the flag also refer to the keys – in heraldic terminology, there is no distinction between yellow and gold (the metallic color or), nor between white and silver (argent). The white has also been reported in relation with the white mountains of Lebanon and of the biblical city of MiehWMieh according to the Lebanese Historian Anis Freiha.

The flag is flown or displayed worldwide in Roman Catholic churches and institutions, usually alongside the national flag of where the church or institution is located.