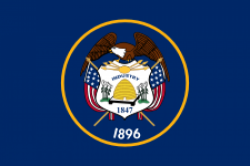 The flag of the state of Utah was adopted in 1913 and consists of the seal of Utah encircled in a golden circle on a background of dark navy blue.

A bald eagle, the national bird of the United States, symbolizes protection in peace and war. The sego lily, the state flower of Utah, represents peace. The state motto "Industry" and the beehive represent progress and hard work. The U.S. flags show Utah's support and commitment to the United States. The state name "Utah" appears below the beehive. The date 1847 represents the year the Mormon pioneers entered the Salt Lake Valley, while 1896 represents the year that Utah was admitted as the 45th state to the Union.

In 2001, the North American Vexillological Association surveyed its members on the designs of all 72 U.S. state, U.S. territorial and Canadian provincial flags. Utah's flag was ranked 58th out of the 72 flags.[