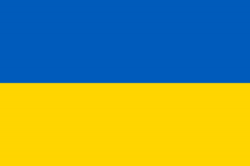 At that time the commonly used yellow–blue flag had already turned into blue and yellow and sported a trident (tryzub) in the upper left corner. The insignia remained unchanged by the successive government of Pavlo Skoropadsky, and then by the Directorate of Ukraine. During the Soviet era, Bolsheviks had been using red and later red-blue flags as the official flag of the Ukrainian SSR. The blue and yellow flag was officially restored in 1992 following Ukrainian independence.

Article 20 of the Constitution of Ukraine states “the State Flag of Ukraine is a banner of two equally sized horizontal bands of blue and yellow colour.”

Ukraine celebrates Flag Day each year on August 23 since 2004.[