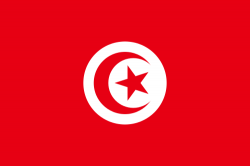 The red and white flag of Tunisia, adopted as national flag in 1959, was in origin the naval ensign of the kingdom of Tunis, adopted in 1831 by Al-Husayn II ibn Mahmud. The current official design dates to 1999. The star and crescent recalls the Ottoman flag and is therefore an indication of Tunisia's history as a part of the Ottoman Empire.