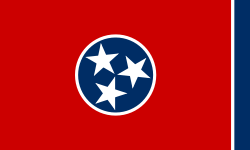 The flag of the state of Tennessee consists of an emblem on a field of red, with a strip of blue on the fly. The emblem of the middle consists of three stars on a blue circle

In a 2001 poll conducted by the North American Vexillological Association, the flag of Tennessee was ranked 14th in a list of 72 flags of North America, including all the state and provincial flags of the U.S. and Canada