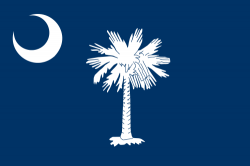 The flag of the state of South Carolina has, in some form, existed since 1775, being based on one of the first Revolutionary War flags. South Carolina's flag was ranked as the 10th best designed state or provincial flag in North America by the North American Vexillological Association in 2001.

The symbolism in this flag dates back to 1765 when opponents of the Stamp Act marched in protest behind a blue flag bearing three white crescents.