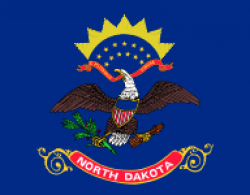 The design for the flag of the state of North Dakota is an almost exact copy of the unit banner carried by the state's troop contingent in the Philippine-American War. It was adopted by the North Dakota Legislative Assembly on March 3, 1911, although the color was not precisely specified at that time. Legislation in 1943 brought the flag in line with the original troop banner, which is on display at the North Dakota Heritage Center in Bismarck. The flag also resembles the Great Seal of the United States.

In 2001, the North American Vexillological Association surveyed its members on the designs of the 72 U.S. state, U.S. territorial and Canadian provincial flags. NAVA members ranked North Dakota's flag 56th out of the 72.

The flag's official proportions are 33:26, significantly shorter than many other state flags; however, in practice, the flag is produced and sold in 5:3 ratios.