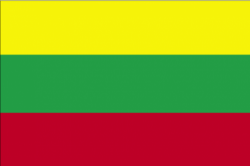 It was first used in Lithuania's first period of independence (in the 20th century) from 1918-1940, which ceased with the occupation first by Soviet Russia and Lithuania's illegal annexation into the Soviet Union, and then by Nazi Germany (1941-44). This flag (1918-40) had lighter colors. During the post-WW2 Soviet occupation, from 1945 until 1989, the Soviet Lithuanian flag consisted first of a generic red Soviet flag with the name of the republic, then changed to the red flag with white and green bars at the bottom. The last alteration to the current flag occurred in 2004 when the aspect ratio changed from 1:2 to 3:5. The flag is identical to the flag of the Danish island Ærø, also located by the Baltic Sea.