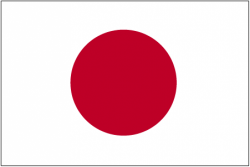 The national flag of Japan is a white rectangular flag with a large red disk (representing the sun) in the center. This flag is officially called Nisshōki (日章旗?, "sun-mark flag") in Japanese, but is more commonly known as Hinomaru (日の丸?, "circle of the sun").