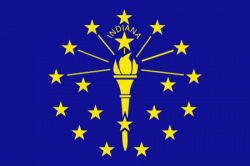 The flag of Indiana was designed by Paul Hadley and officially adopted by the state of Indiana on May 31, 1917. It was the state's first official flag and has remained unchanged since then except for the creation of a statute to standardize the production of the flag.

In 2001, a survey conducted by the North American Vexillological Association (NAVA) placed Indiana's flag 32nd in design quality out of the 72 Canadian provincial, U.S. state and U.S. territory flags ranked.

The current statute that governs the design of the state flag states:

The flags dimensions shall be three feet fly by two feet hoist; or five feet fly by three feet hoist; or any size proportionate to either of those dimensions. The field of the flag shall be blue with nineteen stars and a flaming torch in gold or buff. Thirteen stars shall be arranged in an outer circle, representing the original thirteen states; five stars shall be arranged in a half circle below the torch and inside the outer circle of stars, representing the states admitted prior to Indiana; and the nineteenth star, appreciably larger than the others and representing Indiana shall be placed above the flame of the torch. The outer circle of stars shall be so arranged that one star shall appear directly in the middle at the top of the circle, and the word "Indiana" shall be placed in a half circle over and above the star representing Indiana and midway between it and the star in the center above it. Rays shall be shown radiating from the torch to the three stars on each side of the star in the upper center of the circle.