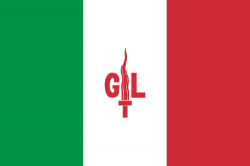 They began to organize the resistance against Italian Fascism, forming clandestine groups in Italy and setting up an intense propaganda campaign, publishing under Lussu's maxim: "Insorgere! Risorgere!" (Rebel! Revive!). Carlo Levi was named a director of the Italian branch along with Leone Ginzburg, a Russian Jew from Odessa who had emigrated with his parents to Turin.