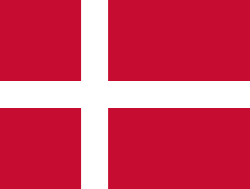 The Flag of Denmark (Danish: Dannebrog Danish pronunciation: [ˈdanəˌbʁoˀ]) is red with a white Scandinavian cross that extends to the edges of the flag; the vertical part of the cross is shifted to the hoist side. The cross design, which represents Christianity, was subsequently adopted by the other Nordic countries; Sweden, Norway, Finland, Iceland, Åland Islands and the Faroe Islands, as well as the Scottish archipelagos of Shetland and Orkney. During the Danish-Norwegian personal union, Dannebrog ("Danish cloth") was also the flag of Norway and continued to be, with slight modifications, until Norway adopted its current flag in 1821.

According to legend, the flag came into Danish possession during the Battle of Lyndanisse in 1219. The Danes were on a failing crusade in Estonia, but after praying to God a flag fell from the sky. After this event, Danish King Valdemar II went on to defeat the Estonians. The first recorded uses of the flag appear some one hundred years later.