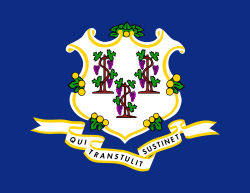 The flag of the state of Connecticut consists of a white baroque shield with three grapevines (each bearing three bunches of purple grapes) on a field of azure blue. The banner below the shield reads "Qui Transtulit Sustinet", ("He who transplanted still sustains"), the state's motto. The flag dimensions are 5.5 feet (1.7 m) in length and 4.33 feet (1.32 m) in width.

The Connecticut General Assembly approved the flag in 1897 after it was introduced by Governor Owen Vincent Coffin in 1895.The design comes from the seal of Saybrook Colony when it was established in 1639. That seal depicted 15 grapevines and a hand in the upper left corner with a scroll reading "Sustinet qui transtulit".